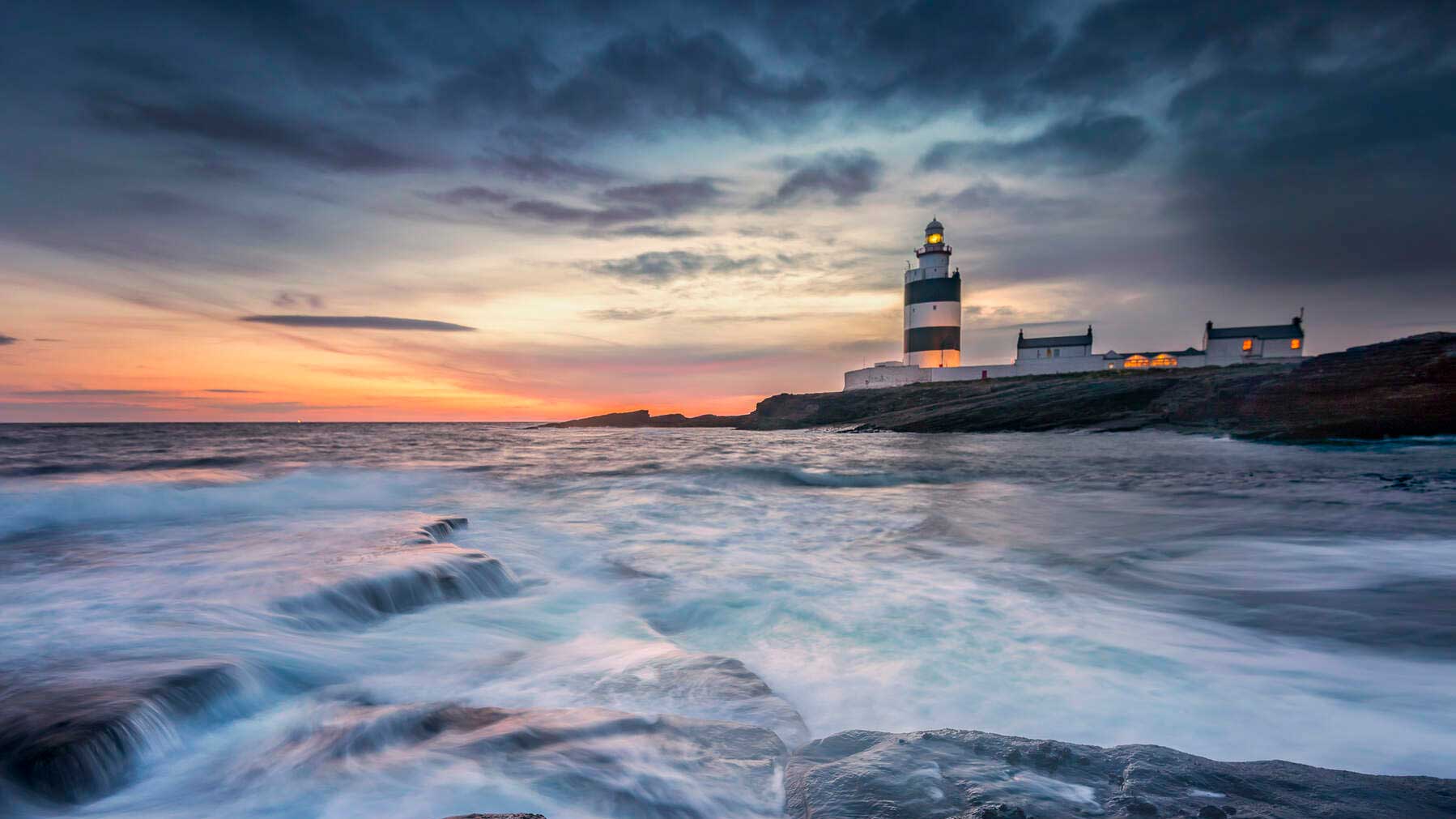 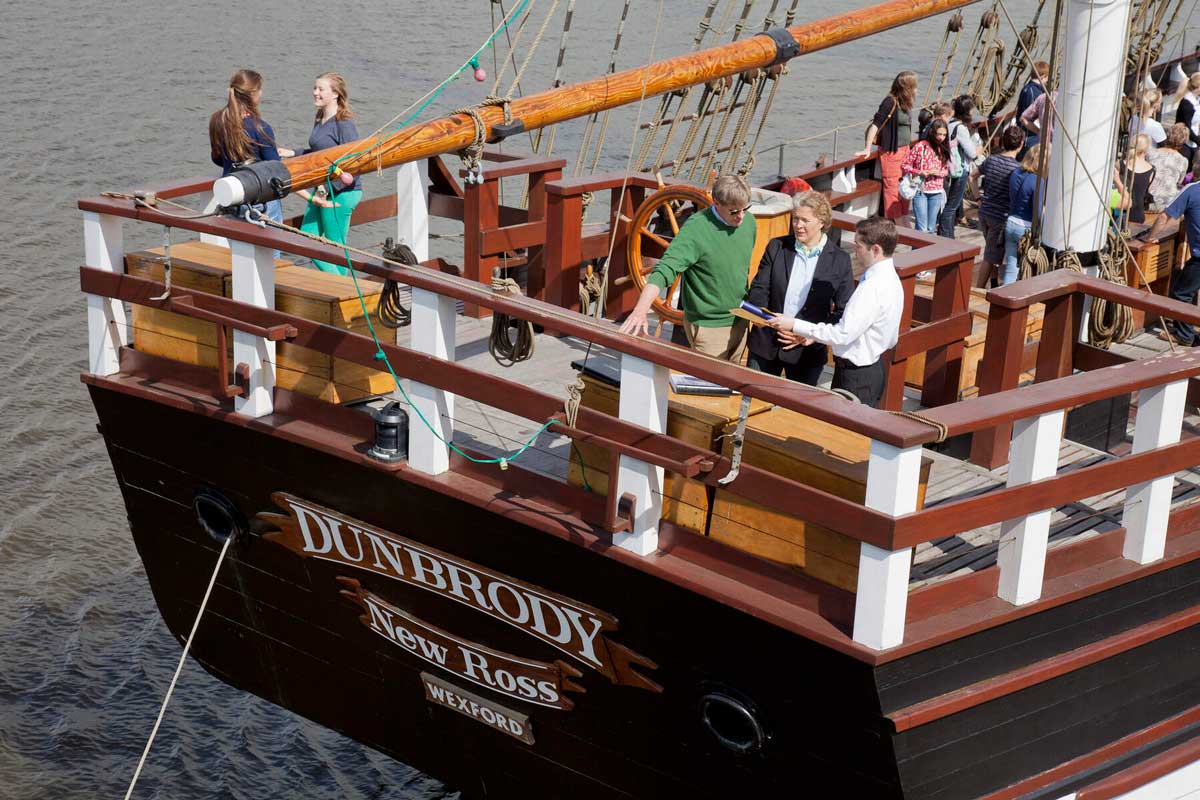 From a magical valley to a Medieval city, manor houses and migrant tales, Ireland’s Ancient East offers a staggering trip through history for the curious traveller, writes Jillian Bolger.

Pinned between dense forest and a vertiginous drop, I carefully pick my way along the Spinc. The undulating cliff path follows the line of the mountain ridge, a narrow wooden boardwalk straddling bog and grass, stream and rock. Just 23 miles south of Dublin city, I see neither car nor building, road nor power line. Below me, a long, deep lake fills the valley; at its eastern end a smaller, rounder one. Together these inky blue mirrors appear like one giant liquid exclamation mark, a trick of topographical punctuation that perfectly expresses the wonder of this magical place.

And it’s difficult not to feel wonder. Glendalough – meaning Valley of the Two Lakes – doesn’t just impress with its pristine panoramas, but also with its illustrious history. The isolated valley, carved out by glaciers 20,000 years ago, is home to one of Ireland’s most remarkable monastic sites. Long before the day-trippers came; long before the British built the Military Road – one of the first purpose-built roads in the country, designed to flush out 18th-century Irish rebels hiding in the mountains; long before marauding Vikings came over the hills, Glendalough was a haven for pilgrims.

The spectacular valley’s first recorded inhabitant, a hermit named Kevin, left quite a legacy for a man who slept in a cave and wore animal skins. Canonised in 1903, St Kevin was a simple man, who sought solace here in the 6th century. His nature-loving way of life soon attracted other followers, and he founded a monastery by the lakeshore. As the community grew so too did the site’s importance. A mainstay of civilisation and learning, Glendalough became one of Europe’s most important ecclesiastical centres, thriving for over 500 years.

At its peak, the beautiful monastic city had seven churches; it’s a thrill to stand here and imagine the industrious community, praying and farming, crafting and carving. The surviving buildings date back from the 10th to 12th centuries, with St Kevin’s Church still impressively intact, yet, here, amongst the amber-hued plants and Celtic crosses, it’s a 30-meter high round tower that draws the biggest crowd. Once a bell tower and beacon for approaching monks, its Rapunzel-Esque stature hints at something far more intriguing: its role as a watchtower and refuge from raiders.

And it wasn’t long before the Vikings made their way through the Wicklow Mountains, in search of treasures to take back to their Dublin stronghold. With its narrow doorway sitting 3 metres off the ground, lore suggests that the monks were able to pull up a ladder behind them and hide inside, keeping themselves and their treasures safe from the invaders. (Intriguing as the explanation is, the elevated door appears to be a shrewd engineering decision, as a ground-level entrance would weaken the structure.) Whatever the truth, these towers did, most likely, keep valuables safe under attack.

It’s unlikely that the Vikings stopped to marvel at the beauty of the valley, nor the pillaging Normans who came after them, eventually destroying the monastic site forever. And while church reorganisation saw Glendalough’s importance wane in 1214, its enduring beauty still attracts pilgrims of a different kind today: tourists, city workers, hikers and families all seeking refuge from modern life. There are plenty of hostelries in the tiny village and neighbouring Laragh for refuelling with BrookLodge & Macreddin Village the perfect place to overnight. Dinner in The Strawberry Tree offers a chance to enjoy imaginative or fancy produce with a local flavour.

Heading south towards Kilkenny City, the medieval capital of Ireland seems somewhat diminutive in size. Earning its stripes as a city, thanks to its cathedrals and a royal charter from 1609, it flourished in the Middle Ages. Compact and walkable, its pretty streets are lined with landmark buildings, from the beautiful Norman Castle, built-in 1195, to St Canice’s imposing cathedral. A stroll through town feels like a walk through the pages of a history book, the Medieval Mile offering up a 13th-century abbey, one of the country’s oldest pubs, the 14th-century Kyteler’s Inn, and Rothe House, a 17th century Tudor silk merchant’s home. Book-ended by the castle and cathedral and straddling the River Nore, this is an ancient city with a modern outlook.

Once you’ve had your fill of history and heritage, turn your attention towards Kilkenny’s vibrant culture. From pub life to great food and local crafts – Kilkenny is the craft capital of Ireland – it’s a fun place to explore and hang out. The gallery-like Kilkenny Design Centre in the castle yard is a good starting point, offering up sublime shopping, while coffee and ridiculously good pastries in CakeFace Patisserie are mandatory Kilkenny pleasures. By night, dine casually in Zuni or dress smart and eat at Campagne, the city’s Michelin-starred restaurant where Irish ingredients are given star billing, and tables tricky to secure. The best beds in town are in the sumptuous Butler House within Kilkenny Castle, which has been beautifully restored.

With all its charms, it’s easy to forget that Ireland wasn’t always a hospitable place, with 1.5 million people fleeing our shores during the Great Famine. A trip south from Kilkenny, towards the town of New Ross, will reveal the Dunbrody Famine Ship from a very different Ireland. One of eight cargo vessels built in Quebec for a wealthy merchant family from Wexford, it was launched in 1845, the year Ireland’s potato crop failed. Refitted hastily to carry emigrants, The Dunbrody ended up making countless passenger trips between Quebec and Ireland. The replica ship, moored on the River Barrow, can be explored at the fascinating Dunbrody Famine Ship Experience, its tiny bunks and ships rations providing food for thought for the modern traveller.

Continuing your trip south, head to the Wexford coast, where Hook Head is waiting to impress. It’s here you’ll find the world’s oldest working lighthouse standing sentinel on the glorious windswept headland. Purpose-built 800 years ago, Hook Lighthouse overlooks the beautiful estuary where Vikings once sailed on their way to establishing Vadra Fiord – Waterford – in the ninth century.

As you gaze out to sea from the lighthouse, you’ll find yourself daydreaming of the monks and marauders, migrants and merchants that all came this way, playing their part in shaping Ireland’s Ancient East.