There’s even a school playground rhyme about Hot Cross Buns, sung while clapping in time to the rhythm of the words. A childhood favourite for generations. And it goes like this:

If you have no daughters, Give them to your sons,

In Ireland, the UK and as far abroad as New Zealand, Australia, Canada and India, Hot Cross Buns are eaten every Good Friday in Christian communities. They are symbolic of this significant day in the Christian faith when Jesus was crucified. Each bun is decorated with a cross made from flour paste, which represents the cross on which Christ died. The spices in hot cross buns are said to represent the spices that were used to embalm Christ after his death.

One old belief says that if you bake your Hot Cross Buns on Good Friday, they won’t go mouldy during the following year. Another tradition states that a hot cross bun was always kept from the batch baked on Good Friday, in case anyone in the family became ill during the next year. A small piece of the bun would be broken off to feed the patient. These buns had extremely holy connotations and were believed to be able to cure all ills, including the most dreadful diseases.

CROSS BUNS AND THE GODDESS EOSTRE

Hot Cross Buns are inextricably linked to Easter and to Christianity. But in reality, they probably have pre-Christian origins. ‘Cross Buns’ were baked to celebrate Eostre, a Germanic Goddess of Fertility, after which the season of Easter is said to be named. Eostre was a voluptuous blonde maiden, always depicted surrounded by little birds, bunnies and other baby animals, as well as spring flowers. Cross Buns were baked for the spring festival to celebrate this Goddess. The four quarters of the cross on top of each bun were said to represent the phases of the moon, while the cross itself symbolised rebirth after winter.

BAKE YOUR OWN HOT CROSS BUNS

Whichever theory you wish to attach to your Hot Cross Buns, we can all agree these are the seasonal treat of the holidays. They join Simnel Cake, the light fruit cake topped with marzipan and twelve marzipan balls which represent Christ and his disciples minus Judas, as a traditional baked treat of the Easter season.

If you fancy trying out the theory of whether they will go mouldy or not if you bake your Hot Cross Buns on Good Friday, here’s an easy to follow recipe from Darina Allen at Ballymaloe Cookery School! 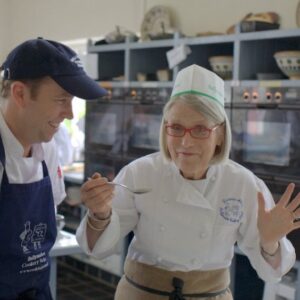 Ballymaloe Cookery School instils its students with a love of local produce, under the inspirational tutelage of Darina Allen.