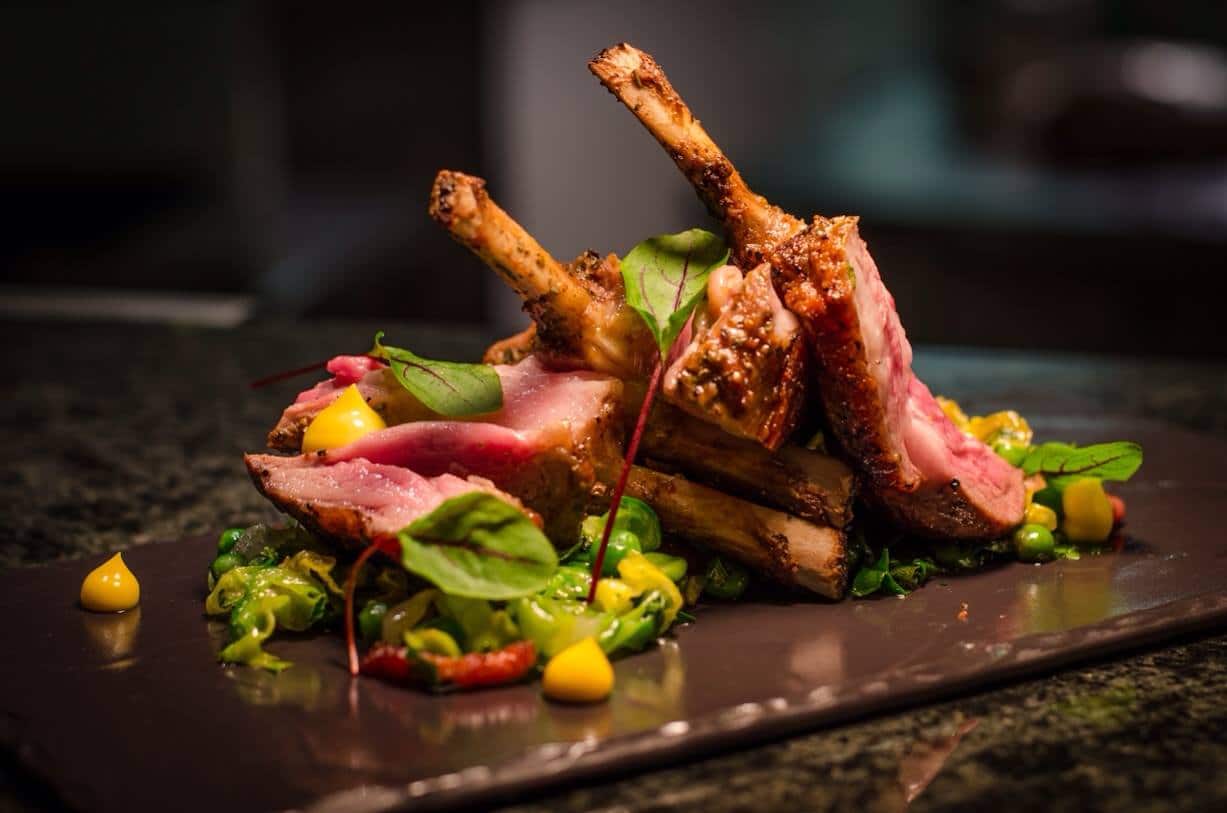 ‘Heather sweetened – seaside seasoned’, so say the Calvey Family of their Achill Mountain Lamb. The lambs are reared, slaughtered and butchered by the Calvey family on Achill Island on the west coast of Ireland. The lambs have the freedom to graze all over the island and munch on wild herbs, heathers, grasses, mosses, lichens and seaweed. This ensures Achill Lamb products are bursting with the flavours of the Island.

Since 1962, the Calvey’s have also been slaughtering and butchering their blackface lambs in their own abattoir and butchery on Achill Island and today, the family still use the same craft work, artisan traditions and specialised skills.

If you’ve ever been to Achill Island, an inshore island on the Wild Atlantic Way off the Mayo coast, the one thing you’ll have seen plenty of are its famous Mayo Black Faced Mountain Sheep. These stunning creatures with their long shaggy coats, black faces and legs and curly horns are believed to be descended from the wild horned sheep which were found in ancient Asia.

They were introduced to Britain by the Danes, then to Ireland by English landowners in the late 19th century. The sheep on Achill were probably imported from Scotland to Mayo in the 1850s.

The Calveys have been farming their own 100% pure bred strain of the early Mayo Blackface since 1856, and ewes are descendants of the original flock. These agile creatures can handle any terrain. They wander up the mountains, over steep hillsides and even down to the beach. Achill Mountain Lamb is reared completely free of boundaries. This is a method called wild grazing which is completely uninfluenced by the farmer and gives distinct tastes to the meat.

A diet of wild mountain grasses, fragrant heathers and alpine herbs is complemented with salty seaweeds from the shoreline. Hence the phrase ‘heather sweetened and seaside seasoned’ that the Calvey family choose to describe the taste of the meat they produce.

Achill Mountain Lamb is farmed by the Calvey farm and other neighbouring farmers on the island, which work to the specifications of the Calvey family. Martin Calvey first established Achill Mountain Lamb in 1962. At that time, the locals weren’t using the lamb, it was more hogget and mutton that was cooked, because it could be cooked slowly in the pot while the people worked out on the land all day.

The lamb market was born of the visitors who appreciated the delicacy of the product. So Martin established his own abattoir and butcher’s shop for the lamb. A great man for the chat and the charm, Martin could tell visitors about all the stages from the farming to the diet to the production. Then he would have the lamb all ready and butchered and put in a box for tourists to take home. And that’s how Achill Mountain Lamb began.

Martin still works on the land and in the shop, and generally oversees the production of his Achill Mountain Lamb. Martin has spent the bones of 60 years in this business and his work in providing a traditional farm to fork product is being continued by the family. There are ten Calvey siblings, two boys and eight girls, who have all been brought up with this business, and most of them have a role today. Whether that’s full time like daughter Martina, or when they come home on holiday and are given a job.

The Calvey’s take care of all the processing of Achill Island lamb. This is a calm and stress free experience for the animals as they are walked to the abattoir and dealt with one at a time, which Martina says makes a huge difference to the condition of the meat afterwards. Everything is done by hand, from the removal of fleeces to evisceration and butchering. The products have 100% traceability to Achill Island.

The gift of nature, the craft of Calveys, as Martina tells us. We can expect absolutely nothing to change at Achill Mountain Lamb as the years continue to go by. And that’s a great thing.

Every cut is included so you get a wide variety of choices for different methods of cooking. Cuts are packed separately and labelled. Each box contains a special little book which tells the Calvey’s Achill Mountain Lamb story with recipes and has useful information on the island to help you get the very most from this traditional artisan and handcrafted product at home. ‘From our hilltop, to your table top’, as the Calveys are proud to say.

You can meet the Calvey family face to face and purchase their amazing product range at their dedicated Farmstore, located on Achill Island.

The Calvey family are selling their delicious range of Achill Mountain Lamb products from their very own dedicated farmstore. Here you’ll find everything from lamb burgers to sausages, leg of lamb, shoulder of lamb and much more. All butchered at the family’s abattoir. 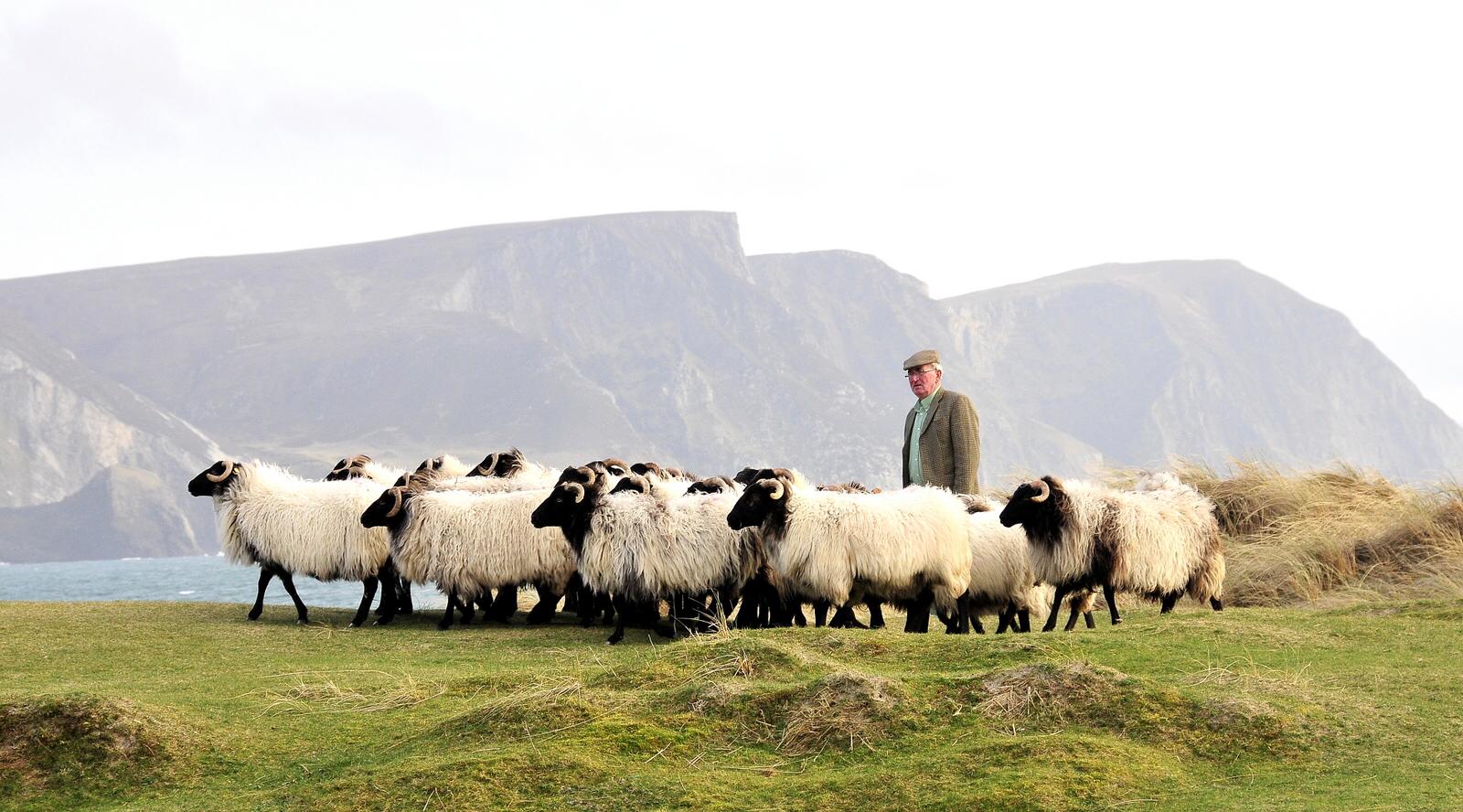 Sustainability ranks very high for the Calvey’s and their business. Through various activities they take care of environmental, social and economical sustainability.

For example, the company works with local farmers and pays them a premium price for their product. This ensures that the abattoir stays on the island which ensures that there is full control over the quality of the end product as well as ensuring a thriving local community. The Calvey family really have dedicated themselves to being great role models for sustainability on Achill Island.