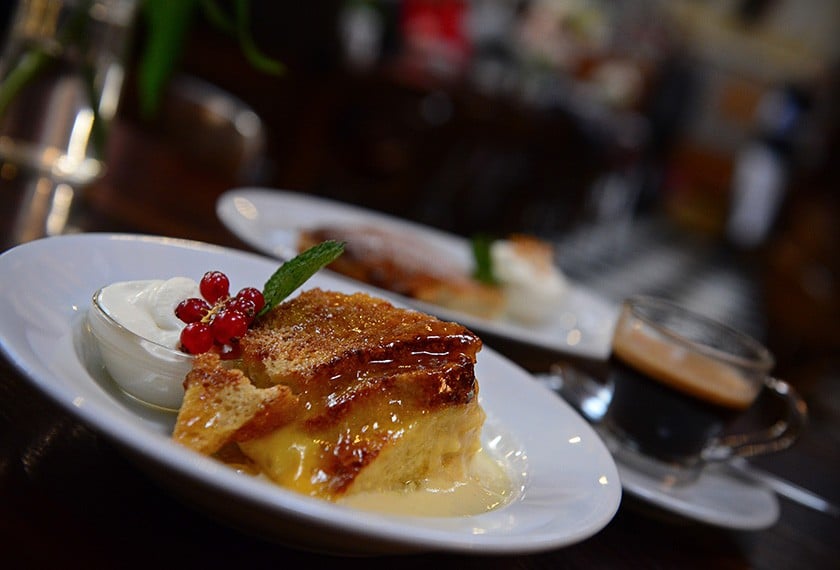 of The English Market, Co. Cork

Owner Kay Harte has long since being committed to local food, purchasing produce from The English Market below for her daily menus. Like her sister MĂ Read More ˇrĂłg O'Brien of Farmgate Restaurant and Country Store in nearby Midleton, Kay Harte is committed to producing dishes with a local flavour, and which reflect the bounty of the famous food market beneath. The cafĂ© enjoys splendid views from its galleried perch, high in the apex of this old and historical building.
Learn more about our member
Share:
Share

Remove the crusts from the bread, butter each slice (one side only) and then cut each slice into half (diagonally to make triangles).

Arrange one layer of bread, buttered-side down over the base of the buttered baking dish.

Sprinkle the bottom layer with some cinnamon and half the raisins.

Cover the second layer of raisins with the remaining bread, again, buttered-side down.

Next make the custard:

Measure out the milk and add the cream, then whisk together with the eggs, vanilla extract, sugar (add a pinch of salt if using unsalted butter).

Pour the mixture through a fine sieve over the bread. Sprinkle the sugar over the top of the pudding, and some freshly grated nutmeg

Cover the pudding and allow soak up the custard for at least 1 hour, or you could even refrigerate over night (if soaking overnight â€“ reserve some custard and add before cooking the next day).

Place the pudding in a bain-marie (pour in enough water to come halfway up the sides of the baking dish), and bake in the middle of the oven for about 40 â€“ 50 minutes (maybe up to 1 hour), until the top is crisp and golden and the custard is set.

Serve the pudding warm with some softly whipped Irish cream, or extra custard.

Sign up to the Good Food IrelandÂ® Magazine and be in the know of what Ireland has to offer. The best news and advice direct to your inbox.
already Have an account please login below
Login